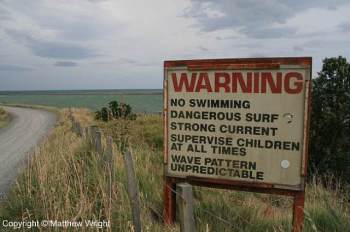 The sign had stood for years, it’s weathered words still legible. It had stood for so long that it had ceased to be a warning and was no more than a backdrop to the locals that visited the beach.

Perhaps the boy read the sign. More than likely it was as invisible to him as it was to most folks. It didn’t really matter after all. His body floated to shore three days after he disappeared under the surface of the treacherous waters. Local authorities cordoned off the section of the beach where the early morning surfer had discovered him.

The gathering crowd chattered and people craned their necks to see what they could. The grieving mother wept loudly at the front. As the police brought the boy’s body to the waiting ambulance on the stretcher, it wasn’t his missing leg that Gavin noticed. It was the strange red circular marks that covered the boys limbs and torso. A shark could have torn off the leg, but those marks spoke of something else lurking in the depths off shore. Gavin shuddered. He knew the currents were not the deadliest thing on this beach.

[My entry into the super-short mega story writing challenge by Matthew J. Wright.]

Speak and Be Heard! (or write and be seen, actually) Cancel reply

Follow The Well of Fiction on WordPress.com
Join 282 other followers

© Chris Wood and The Well of Fiction, 2015. Unauthorized use and/or duplication of this written material without express and written permission from this site’s author and/or owner is strictly prohibited. Excerpts and links may be used, provided that full and clear credit is given to The Voice and The Well of Fiction with appropriate and specific direction to the original content.

Copyright © 2015 · All Rights Reserved · The Well of Fiction